As a young Asian girl immersed in a world plastered with billboards of white models and magazine pages filled to the corners of skinny blonde women, it’s hard for me (as someone with short black hair, brown skin, and a round nose) to come to terms with the fact that I am pretty enough. Not by societies standards, but by my own.

This may seem as though I’m going off on a radical tangent of self-love, but when you’re a brown woman who has never seen herself represented in the world of fashion, film or politics as anything aside from a stereotyped television character, it is unbelievably difficult to even think that you are good enough to be seen as anything but a tokenized minority.

Eurocentric beauty standards are the root cause of misrepresentation and under-representation of minorities within the media. Post-colonial attitudes have been engrained into society so deep that the paler you are, the smaller your nose, and the slimmer you are, the higher chance you have of being successful and deemed desirable in life. Just take a look at all the skin brightening creams that have been popular in the market in most of Asia. 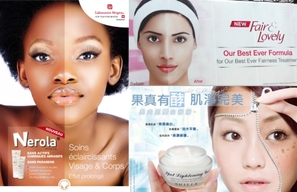 The source of this detrimental mindset most definitely stems from the media, considering it already plays a huge role in maintaining systematic structures of racism and colourism. Not only does this lead to the whitewashing of Black and Brown characters but can result in Asian erasure. It maintains the notion that our features, our culture, our food, our heritage – all of it is only worth being displayed when it is on the body of someone who reinforces these ideas.

The absurd ideology that eurocentrism is the most desired beauty is reinforced through the media we willingly immerse ourselves into without noticing the consequences.

From Ashton Kutcher’s brown-face in a Popchips commercial to Scarlett Johanson’s whitewashing “Ghost in Shell”, the atrocities that “The Love Guru” brought to our screens, or even the stereotype and mocking of Asian characters in “The Simpsons” from 1989 to present day, the media favours fairer complexions because it’s those actors who are providing their white audiences with Eurocentric features and guilt-free watching.

However, when there is finally an Asian character, before we can sigh out in relief, they present us with someone who is stereotypically poor or a bad guy and yet again most probably requires a white male saviour. Really, it’s nothing new.

I truly believe that if we have a desire for change the diversity and reflections of ourselves brought to our favourite tv shows will only be brought by turning to truly question our own cultures first. Because the pressure to conform to these standards is so fierce, that many of our older, more conservative generations before us, have simply accepted them instead of challenging them. Diversity not only has to be on our screens but behind the scenes too with the writers, directors and producers.

We have all heard of our Asian aunties moaning at us to stay out of the sun in case we get too dark or to lose a little weight to look more attractive or even (and I’m sure we are all familiar with this one) to use lightening creams to “brighten us up”. The worst has to be wearing blue contacts so that one looks ‘exotic and interesting’.

Even just saying all of those comments sounds so wrong and disgusting. We live in a manipulative world that tells us what we can and can not do so when we give in to one of these structural yet flawed norms that have been around since the eras of colonization and slavery- it feels so dehumanizing and malicious to know that we are contributing (and to some extent) responsible for the corruption of our beauty standards today and for future generations to come.

If our own communities are dictated by a societal standard causing them to reject the culture that they have been blessed with, how are we to expect the outsider to love us any more?

And to all the multi-million dollar companies behind the scenes of Hollywood, I ask why you continue to idealize blonde pop stars and white Disney princesses. Is it because their whiteness sells more views, or is it because the people behind the scenes of the play are all white, with no knowledge of Asian culture or ancestry so when you do have a character of colour it’s an exotic, fetishized minority for your majority-white demographic to laugh upon. Please. Stop.

Because of the lack of representation in the cast and simply racist mindsets, that when combined, create a complexity of  detrimental mentalities to young girls of colour, including me, that only shatter our self esteem esteem because yes, tracing back to what I said earlier, it is hard to maintain self-love when you’ve only ever seen yourself through the eyes of someone appropriating, mocking or stereotyping your culture, deeming it dirty or unlovable.

As cringe-worthy as it may sound, self-love really is a politically revolutionary act in a world that teaches us to hate the body that we were born with. So moving forward from today, no matter your age or ethnicity, I want you to embrace yourself for who you are. And P.S: to all the girls who hated their ethnic features growing up, now is the time to laugh because the same white girls who bullied you in school are now paying hundreds of pounds to get lip fillers and their eyebrows micro-bladed!! 😉

Mariam is a passionate activist and cat lover, navigating through life back in England after living abroad in Qatar for over eight years. Currently attending secondary school, Mariam loves learning new languages and the culture that comes with them.  Like most people her age, when she’s not juggling her endless pile of homework, she’s scuba diving with her twin sister or doing another kickboxing class. Mariam is always unapologetic of speaking her mind and continues to spread awareness of issues affecting today’s modern youth and beyond via her Instagram page!

10 Indian Sweets You've Got to Try